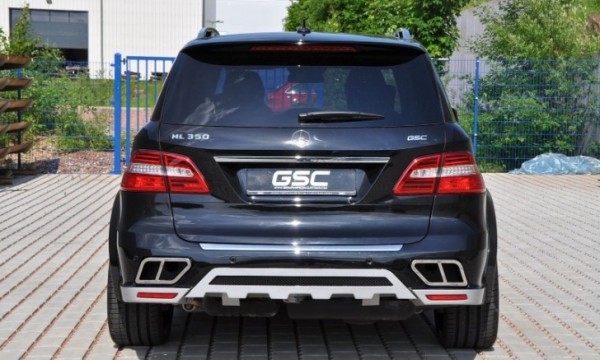 In the last year or so things have begun to heat up in this area, though, since almost all major German tuners have started churning out all kinds of body modifications for the current Mercedes-Benz M-Class.

Now its time for German Special Customs, who just released their “Typhoon” wide body kit for the non-AMG M-Class.

In this case we are talking about an ML 350, with absolutely no modifications made to the engine, which kind of makes the whole project a bit of a let down, despite the body kit looking rather suiting for the car's base design.

The package consists of a sculpted front bumper with LED daylight running lights, a new hood with a massive vent that, again, seems a tad bit inappropriate for the base gasoline engine. There are also a set of extended wheel arches, new side skirts and a rear bumper with an integrated diffuser and four exhaust tips inline with the rest of the design.

The model now sits on 22-inch light alloy wheels and, as we already mentioned, doesn't look half bad despite our problem with the lack of technical modifications. We are also curious about Hamann's opinion about the GSC body kit's name, since they also have a wide body kit conversion - only that it's for a Mercedes-Benz G-Class - that is called Typhoon.
Comments (0)
Add comments

Tesla Motors
14.03.19 Авто
The article is based on Tesla SWOT analysis, which can be found in the Library, in CayenneApps SWOT application.